A Project Completed by the Trust in 2018

Plans to refurbish the Village Room and to broaden its availability began to take shape in 2015. Owing to tight financial constraints it was decided to split the project into two phases. The first, funded by a Community Fund award of just over £5,000 from Effingham Parish Council, was termed “Phase 1” and was undertaken mostly in 2015. The second, funded from EVRT’s own resources, was termed “Phase 2” and was undertaken in 2018.

The goal of Phase 1 was to enable the room to be hired in daytime on weekdays whilst protecting the bar used at other times by Effingham Playing Fields Association. A lockable shutter was installed enabling the bar to be sealed off from the main part of the room. A complication arose through the fact of the light switches being on the inside of the shuttered area. To solve this, a new lighting circuit and switches had to be installed on the other side. This circuit powered new lights, independent of the existing ones. These arrangements consumed 70% of the Community Fund money. The remaining 30% had been earmarked for the renewal of the flooring using low-cost carpet tiles.

At about this time the Trust was being told by grant-awarding bodies that the Village Room was not compliant with the requirements for disabled access; the doors onto the patio were not suitable for wheelchairs, whilst the door leading into the northern corridor was not compliant with fire regulations. Besides the legal implications, these unremedied deficiencies would render the Trust less able to raise grant money. So, it became clear that there would need to be alterations to doorways. Additionally, the room’s decor was in a very poor state. EVRT’s surveys of the public’s wishes also pointed to the value of reinstating the doorway that had originally existed between the Village Room and the Barnes Wallis Hall; new community uses could take advantage of the two spaces being combined, when appropriate, as an integrated hireable facility.

With all these considerations it was decided to defer the Phase 1 flooring until other changes had taken effect.

It was not until 2018 that the Trust felt financially able to get new doorways installed and to get the Village Room into generally better shape. The required “Phase 2” works were paid for using EVRT’s own money, amounting to nearly £12,000. In addition, the unspent £1,500 from Phase 1 was also now deployed. The major part of the redecoration of the room was kindly undertaken free of charge by A J Brown & Sons Ltd to whom the Trustees are most grateful. The final stage of the project was the installation of new flooring, combining good quality carpet and durable Amtico tiles.

The combined expenditure from both phases of the project was nearly £17,000.

The new lights, carpet and decor … 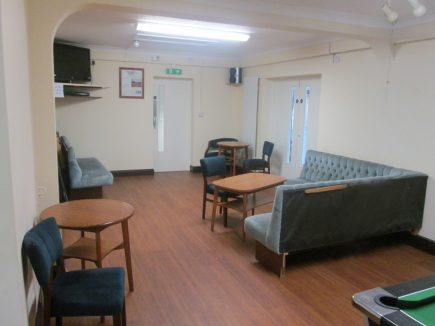